HOA Preso To The Colony City Council – May 16 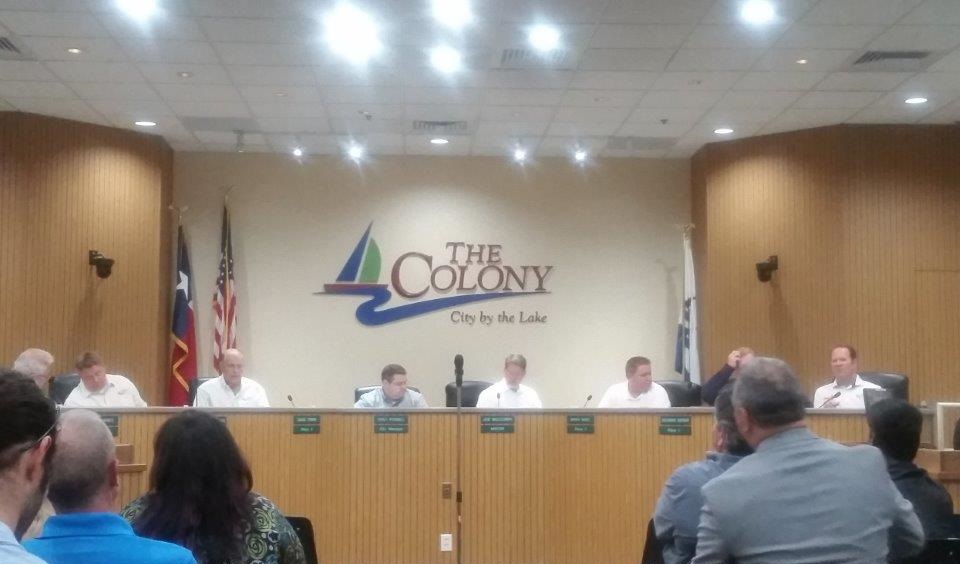 (NOTE: This is the five-minute talk that Bill Kula, HOA communications chair, presented during tonight’s Citizen Input forum to The Colony City council and city manager at City Hall. During the Citizen Input section, the City Council is not obligated to respond during the meeting. They do, however, often take action based upon what they hear.)

“Good evening Mayor, Council and City Manager. I’m Denton County resident Bill Kula, and one of the 80 community leaders like Joe Perez here in the room and on your city staff who helped assemble the just approved $737.5 million Lewisville ISD bond, so I have vested interest in this county.

I reside at 6413 Ladbrook Court in Plano. Tonight, I’m representing the Kings Ridge Homeowners Association, the nearest HOA to the Grandscape development, and one of four HOAs to receive last year’s BEST Neighborhoods highest level award presented by the City of Plano.

In 2015, one of my fellow board members and I spoke to this council about the v-shaped, wind-swept valley that unites the western gateway of Plano and the eastern edge of The Colony and causes sound to travel uniquely.

We asked the council to not expand the acceptable decibel levels or outdoor music times to what they are today in what’s now known as PD 25 or the Grandscape Planned Development. Despite our request, and similar input from a few Colony voices, the ordinance passed and the city staff wrote in its report that there was sufficient landscaping and vegetation in the area to diffuse noise.

On May 3 and 4, neighbors in four Plano communities and a fifth in Carrollton some 3.5 miles away from the newest Grandscape tenant, Lava Cantina, reported hearing stage music INSIDE their homes or in their yard.

On May 4, about 40 calls were fielded by The Colony Police non-emergency dispatch center with reports of unreasonably loud, disturbing noise which caused a variety of distress involving babies, students and adults.

By law, no business in the Grandscape development can emit noise levels above 95 decibels beyond 330 feet. While no reports in excess of what’s legally allowed have been reported, some neighbors stressed concern for hearing a steady frequency of stage music inside their homes more than 6,500 feet from the stage. Homes in the north Carrollton HOA that heard stage music May 3 and 4 are located more than 15,000 feet from the Lava Cantina stage.

The good news is that the Kings Ridge HOA has worked closely with the owner of Lava Cantina since the noise issue began. Many short-term fixes are helping reduce noise levels, and a number of long-term solutions involving sound walls and acoustical walls are in the works with the hope for a win-win.

The owner has gone so far as to temporarily end all weekday performances by 10 p.m. and weekend performances by 11 p.m. This is a true business/neighbor partnership in play and could be a blueprint for other communities.

Lava Cantina’s owner has said that “decibels are not a problem, but music reaching homes is an issue that needs to be resolved and hearing music inside homes is not acceptable.”

As word traveled about the noise issues, City of Plano and The Colony officials have had meetings about the matter, and several leaders joined our HOA board meeting last week at our invitation including The Colony’s Police Chief Coo-lawn and Lt. Fox.

As members of the news media, city officials, state leaders and others have heard me say, we’re seeking to achieve regional success and believe it can be achieved. We’re appreciate of city manager Powell saying “it’s important for us to find a resolution quickly,” and it’s at his invitation that I’m here to discuss a few things we ask very specifically of The Colony.

As a baseline, it’s our understanding from city staff that the regular sound ordinance of The Colony is not applicable to businesses in the Grandscape development. In addition, the PD ordinance that governs sound in Grandscape is only for The Colony since the city has no authority outside that area according to city staff.

However, Colony officials have said it will respond to noise complaints from Plano residents that come from The Colony businesses and deal with them as it has in the case of Lava Cantina.

Here’s our four requests of you and city staff:

One, this should not be a question of “authority,” as suggested by city staff, but of “responsibility” to consider the noise pollution that Grandscape businesses have already, or could in the future, potentially produce a nuisance to residents outside of The Colony’s jurisdiction.

Two, the City of Plano staff and PD department encouraged Plano residents to contact The Colony PD if stage music from Lava Cantina became bothersome. On May 4, when the 40 called were fielded to The Colony dispatch, it was concerning as Mr. Powell, Police Chief Coo-lawn and Plano Police are aware, that a Colony dispatcher told one of my neighbors that she would stop answering calls from Plano residents if they kept calling, insisting the business was operating within its rights, and that there was no noise disruption.

(As a side note to our HOA meeting last Thursday, we have already begun creating a web-based solution that will allow neighbors to funnel complaints, concerns, recommendation and kudos so they can be group shared with The Colony and Plano staff.)

This won’t necessarily prevent calls being routed to the non-emergency number, but if those calls are needed, we would appreciate the support of The Colony PD to field all calls and not grow agitated. After all, if the Grandscape tenants were governed by the The Colony’s regular sound ordinance, these reports would be considered a nuisance and prohibited by The Colony.

Three, we’re asking for The Colony to re-evaluate the Grandscape Planned Development as it pertains to anticipated noise from future tenants, particularly those that will have some aspect of outdoor dining and music like the Truck Yard and Quincy’s Chicken Shack, both to be located considerably closer to homes in Kings Ridge than Lava Cantina. Specifically, we’d like The Colony to reconsider the PD noise ordinance as it pertains to the Truck Yard about 750 feet from some Kings Ridge homes.

Four, my HOA last week asked Truck Yard officials to meet with us to discuss the lessons learned from Lava Cantina to pre-address noise issues that will emanate from their future venue. The Lava Cantina owner and City of Plano senior leaders have offered to be involved in such a meeting, and we invite The Colony leadership to be part of that future meeting in the spirit of being a good regional partner.