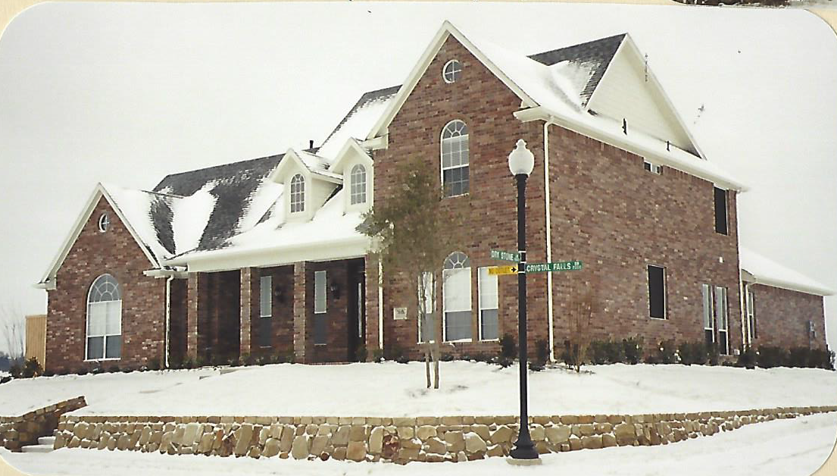 Twenty years ago this week, snow fell softly upon the western gateway of Plano as the Kings Ridge neighborhood was born under a blanket of white.

Sandra and Mike McBee look back fondly upon the closing of their new home Dec. 27, and their first night’s sleep on Dec. 30, at 7016 Crystal Falls near Indian Creek.

As the neighborhood’s first residents, the McBees are proud to call Kings Ridge their home.

THE EARLY DAYS
What started as a tip by a local builder about a neighborhood under development in far west Plano led Sandra to visit the area in May.

She drove down then sleepy McKamy Trail that had no traffic light on Midway. Upon arrival, she walked around and saw the main lake, tranquil hills and stone walls around some of the raised lots and fell in love.

As then Richardson residents with college students, the McBees made some major life decisions that included selling Mike’s MCI stock he accumulated over the years as an employee, putting their home on the market and meeting with a builder about a new home in Plano.

Attentive to a divine message that Mike said guided him to leave his employer, Mike remains grateful for listening. In March 2000, he retired, and sold his company’s accumulated stock for $48 a share. Just six weeks later, the stock had plummeted to 18 cents a share.

A FIRERY START
Their dream got off to a challenging start. One day, Mike received an urgent call from their home’s superintendent to say a fire had broken out at their Kensington home under construction.

During the phone call, the superintendent said that a crew had left after doing steel work and welding around the chimney.

Soon after, the framing crew entered the primitive neighborhood and saw flames over the hills.

Two firetrucks arrived and the fireman put out the fire that required some extra work to repair the damage caused by a lingering ember.

Fortunate to have had the work crew notice the flames, construction resumed on the McBee home, paving the way for a December closing and move-in day between Christmas and New Year’s Eve.

A SNOWY WELCOMING
“It was extremely quiet,” Mike recalls of being the only residents in Kings Ridge. “It started snowing and we were thrilled to be in our new home.”

In January, Sandra and Mike will celebrate their 55th wedding anniversary. Reflective of the changes over the past 20 years, their youngest grandchild will graduate in May and head to The University of Texas to showcase his 96 mile per hour fastball.

Sizing up their move and the joy of moving into what is now a thriving neighborhood of 579 homes, Mike recalls a special comment that Sandra shared after returning home from a cruise.

She told me, “Of all the places I’ve been in the world, I don’t know any place I’d rather live.”

And thanks to good people like the McBees, Kings Ridge is all the better a place to live, work, learn and play.